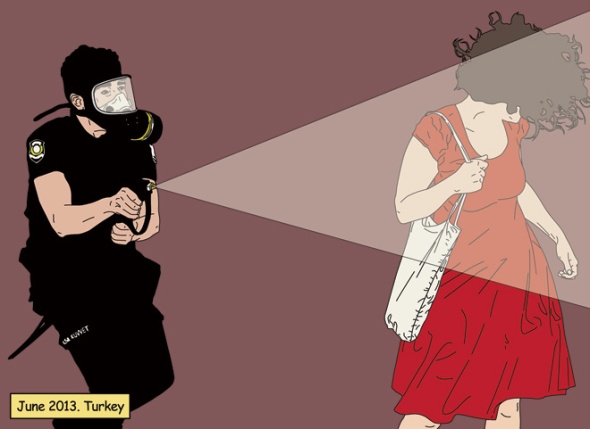 The Woman in Red. She’s become the symbol of protests in Turkey, and the image is fitting: approximately half of the protestors in Turkey are female. And much of what they oppose is Prime Minister Erdoğan’s attempts to exclude women from public spaces by failing to address violence against women, declaring that women should have three children, and promoting abortion restrictions. What better response than to fill these spaces with women who refuse to leave?

Women were instrumental in Egypt’s protests, and they faced frequent sexual harassment and assault–the most chilling approach to keeping women from the public sphere. Look at gender-based violence as a cultural problem, it’s clear that intimate partner violence reflects the idea of women as property, while street harassment and assault serve to keep women from public spaces, to reassert male ownership of the public sphere. Still, Egyptian women continue to fill Tahrir Square, protesting with their voices and their bodies.

And their art. Art has always been central to protest, from creative chants and protest songs that unite marchers and amplify their voices to papier-mâché puppets and performance art calling attention to the protestors’ message. Of course, protest also inspires art that captures the moment and goes beyond the street.

Indignadas (Outraged Women) is a series of images of women in public protests. The first stage focused on Spain, while the second stage, which began this June, expands the project to record the acts of women from around the world. María María Acha-Kutscher, a Peruvian artist based in Spain, turns photographs from witnesses into drawings.

In her own words, “[t]he aim of Indignadas series is to make visible, claim and place the woman at the center of this social struggle. A memory register to remind future generations that social changes throughout history were made by women and men together.” 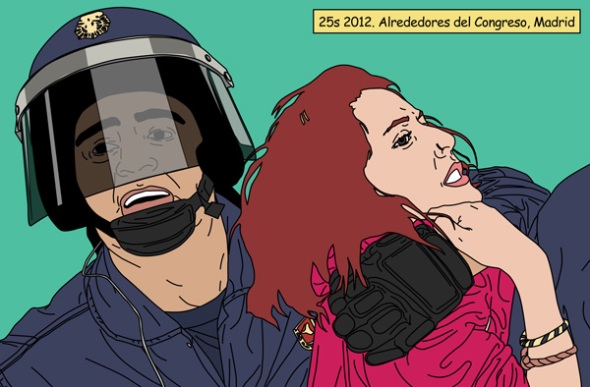 What makes this project truly stand out is Acha-Kutscher’s insistence on women’s bodies as “support for the political message” instead of objects for the male gaze. This conscious attempt to reconsider women’s bodies in art and in the public sphere reflects a critical understanding of the way that women protest with their bodies by simply existing in public spaces.

Women and girls are so often told where not to go. We are blamed when attacked in certain areas because we were in places not meant for us. But by being present in those places, we claim them. On Sunday, July 1, 2013, more than two years after the Arab Spring, at least 46 women protestors were sexually assaulted in Tahrir Square. Men keep attacking them, but women keep appearing, linking arms, and raising their voices.

They know that avoiding these public spaces does not necessarily make women safer. It only exacerbates the problem, completely turning the public sphere over to men and keeping women confined. These protestors act on behalf of all women, risking their own physical safety to demand real and lasting bodily integrity.