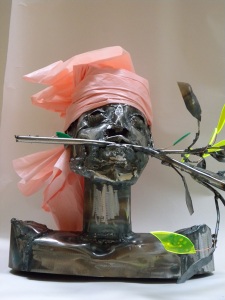 Last week I got into a Facebook argument with someone I didn’t know on a friend’s page. I was a bit embarrassed, as I normally ignore stupid Facebook comments from complete strangers and I didn’t want to turn my friend’s page into my own little soapbox, but he said something I just couldn’t let go.

The guy prefaced his comment by admitting it was ethnocentric and then said the entire continent of Africa is a shithole that has nothing to offer the rest of the world and he has no interest in anything that happens there.

I…I just–I couldn’t let it go. I had to say something. So I said something about imperialism and racial hegemony and recognizing our own roles in the various struggles in various parts of Africa.

As expected, he figured I was a hypocrite because what I had ever done for Africa?

Well, for one thing, I don’t freaking shut an entire continent out of my life because I can’t be bothered with its misery. In fact, I actively engage with issues in Africa though my work in women’s advocacy and enjoy, in particular, music from Mali, food from Ethiopia, and literature from Egypt. Furthermore, I recognize that Africa is made up of countries and cultures that are distinctive and complex and is not just a big pile of shit, thank you very much.

Can you tell I’m still a bit angry?

Sometimes I think I’ve become an angrier person since the internet invaded my life. There’s so much to be upset about!

Let’s all take a deep breath and pour a glass of smoky scotch to soothe us.

The good thing is that there’s a lot to love and cherish and celebrate too. Like this piece on how Western feminists could learn a thing or two from Africa’s many women leaders (64% of the Rwandan parliament, for instance). That’s why I decided to share with you some of my favorite African women working in creative fields today. If you aren’t already familiar with them, you will love them.

why i started this blog

It was probably my junior year of college that I went to see the chair of the humanities department for a little encouragement. Much as I loved literature, I was feeling uncertain about my studies. I had become quite the budding feminist activist, and when I read Alice Walker or Adrienne Rich, I increasingly wanted to get up and DO something. I was not content with scribbling behind a desk. That’s why I knocked on my professor’s door and asked her why we interpret literature.

Unperturbed, she gazed out the window at the blossoming dogwoods. We sat in an office full of dark, shiny wood and cloth-bound books in muted tones, but the sun lit up the world outside. She smiled. “Why do we enjoy a spring day?”

I nodded. It was all I needed to hear to get back to the books, but when I finished school, I decided to join AmeriCorps and become a VISTA. I wanted to learn through experience and to serve others. I felt a great need to make people’s lives better in some way, and my myopic poetry certainly wasn’t going to do that.

The best part of my AmeriCorps assignment in Philadelphia was my weekly visit to an after-school program for at-risk Latinas. We laughed, danced, and learned. It was their safe space in the day because outside of that program their lives were full of violence. A friendly, open senior on a fifth-grade reading level told me that she had been raped by her uncle for years. Another girl–a vibrant, intelligent eighth-grader who attended with her sister–lost her boyfriend to a bullet in the head because he had the best corner.

I loved those girls dearly. It was a profound learning experience for me, one that confirmed everything I thought about the world: oppressions converge to make the notion of pulling oneself up by the bootstraps a joke, investing in education should always be our priority, and giving is better than having.

But I had a serious hankering for a creative fix, so I went back to school and studied poetry and fiction writing. I devoured the pink-covered Vorticist magazine Blast, the stories of Katherine Mansfield, the groundbreaking fiction of Nawal el Saadawi, the verses of Sharon Olds. I studied Said and Spivak, Gilbert and Gubar. I learned to step back from my writing and to revise, revise, revise.

And what do you think happened next? I had enjoyed teaching composition to first-year students who desperately needed to learn how to write a basic argument, but I soured on the idea of teaching poetry to middle-class kids who wouldn’t do anything with it anyway. Fed up with the ivory tower, I abandoned my PhD applications and ran off to Poland to teach English as a second language.

My students came from all walks of life. One was a wealthy CEO whose wife could never travel to the US with him on business trips because officials would not give her a visa for fear that they would stay. “As if I want to move to America to work at McDonald’s,” he would say. “I am a businessman!” There was a shoe designer, a gregarious woman with curly dark hair, who came from Georgia for a better life, and a teenage girl who was frequently in trouble with her mother. I always enjoyed chatting with an amiable young man who could not marry his girlfriend because his low-wage job in a shop kept him living with his family, six people in a two-room flat. There simply wasn’t room for another person.

Every student there was learning English to improve their lives. Most planned to leave Poland for England, Scotland, Germany, or the Netherlands, where they saw opportunities they did not have at home. I felt guilty for being able to go and do whatever I wanted. I felt frustrated that the only way I could help them was to teach them the language of the people who ruled the world.

I came back and worked as copywriter. It felt amazing to get paid to write and come up with ideas with creative folks, but I hated advertising. Obviously. Then I wrote grants for a nonprofit, which led to my work in women’s advocacy–leading online campaigns, influencing legislation, developing and improving programs for women and girls. I truly love women’s advocacy, but sometimes I get so caught up in politics and analysis that the left side of my brain feels heavy. It’s like the right side is withering away.

I try to avoid binary thinking, but somehow I’ve spent my whole life trying to balance these two sides of myself–my desire to create community change and my passion to create art. Sure, writing itself can be revolutionary, but it never seemed enough for me.

Recently, I decided to devote more time to my writing. I brushed off some old poems to submit and revised a story, but writing is a solitary pursuit and I needed to connect. Therefore, I decided to start a blog where I could discuss current events that disturb me: gang rape, slut shaming, cyber bullying, the bizarre need to legislate my body to death.

And then I thought, hey girl, you don’t have to stop there. I realized I could combine politics and art in one spot. I could make my own creativity political. I could sit behind my desk or march down the street, and either way I’d effect change. That’s the birth of Saga, a place to explore feminism and creativity while engaging with other artists and thinkers and doers.

As I write this, birds in the eaves of my house, in the magnolia and pine trees out back, are singing because it’s spring. It’s rainy, and the slender sprouts in my garden are getting stronger. Even now, without much sunshine, I look from my computer screen to the window and remember why I do what I do.

I hope you’ll join me on this exploration.