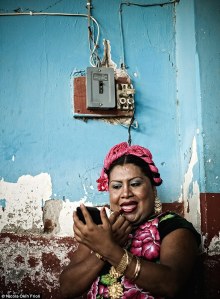 It’s that time where we take a look at a few things we should learn more about, so let’s have at it.

I am obsessed with this collection of photographs from Nicola Ókin Frioli. Los muxes, gay men in the Mexican town of Juchitán, are beloved by the community. Families consider them a blessing, a good luck charm. They drink, work, and legislate in traditional Oaxacan dress: flower-embroidered blouses, brightly colored skirts, and scarves wound through long hair. Yet another reason I should figure out how to retire to Oaxaca.

When the subject of street harassment comes up, people usually argue about how best to deal with it. I’ve tried ignoring it, yelling back, giving the finger, and looking straight at them to ask why they think it’s okay to talk to women that way. David Cross has a hilarious joke about what these men might be thinking when they holler at us, but what I really want to direct you to are two women’s artistic responses to street harassment. In City of Brotherly Love, Hannah Price photographed Philadelphia men just after they harassed her. She captures an interesting moment; some guys look uncomfortable with the lens on them, while others don’t seem to care. Likewise, Tatyana Fazlalizadeh captioned her drawings of women with the things she wanted to tell harassers and then hung the posters around Brooklyn. They sparked a community conversation as people scribbled their thoughts in the blank spots.

Finally, Frieze Week–with two major art fairs and countless gallery openings–just happened in London, and it highlighted more African artists than the city had ever seen. Included as a Frieze Master was feminist artist Nil Yalter. Yalter’s photographs, drawings, paintings, and installations typically focus on aspects of the lives of women and immigrants.