new music: but really this is about kathleen hanna 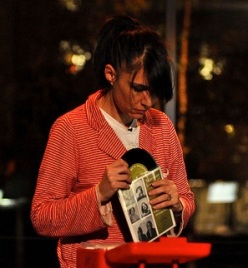 I’m not the new-music sleuth I used to be. Back in the day (the 90s), I loved to flip through CDs and records until I found something that seemed interesting and shell out what little cash I had to make it mine. It was always a bit of a gamble but often worth it. And because I didn’t have much money to spend, each new item was special.

Then I married a serious music collector and ended up in a house so full of records and CDs that I don’t even know where to begin. My collection got swallowed up, and I often don’t remember what I have. He knows what he has, however, because he has a spreadsheet (or something much fancier now, some kind of app, I think) but also because I think he might have a photographic memory when it comes to records. But only records. You might say, no, he has whatever is the equivalent for sound memory, but there are records in there he has never listened to. And he still knows. He’s like the record whisperer.

Not long ago, he confessed that there probably isn’t enough time in his life to listen to everything he owns, so I said, “Maybe you have enough?” He looked at me like I was a naive child or confused alien. Recently, we watched a documentary about crazy record collectors, but that got me thinking that there needs to be a documentary about the people who live with record collectors and their multiplying shelves and stacks and bins and obsessions.

Though I’ve sometimes bought music online, it doesn’t elicit the same thrill as a living, breathing record store. There’s so much music online and so many avenues to wander down that I often feel overwhelmed and just go back to playing out the Cat Power CDs I can see at the front of one of the many shelves in our house.

So I’d been thinking that I needed some new music in my life, but then the news about Pussy Riot’s release (hurrah!) got me in a Bikini Kill mood. The original riot grrrls started their own record label, Bikini Kill Records, and reissued their 1992 self-titled debut in late 2012. It sold out, but they’ve got more now! The 20th anniversary reissue includes cool extras like interviews, liner notes, and zine excerpts. O zines, how I have missed thee! I know, that’s not exactly new music…

Remember that Julie Ruin album Kathleen Hanna made between Bikini Kill and Le Tigre? Get off the internet! I’ll meet you in the street. Well, she formed a band called The Julie Ruin, and their first album, Run Fast, came out last fall. (Oh my god, they have played with Hot Fruit.) That’s new! That counts, right?

Kathleen Hanna’s “Riot Grrrl Manifesto” was instrumental in expanding my feminism and helping me define myself. She was an important figure in my life, and I still adore her.

This all makes me happy, but I need new music from new people. Hold the phone–Cibo Matto has a new record coming out on Valentine’s Day! Their last one came out fifteen years ago. Fifteen years!

I promise that my next music post will be about new music.